Today I want to ramble about two closely-related decisions in RPG design, both relating to Hammondal.
A couple of months ago, I realized that a significant portion of the city, especially among the Boranese mercantile cultures, are living puppet-people called the Mantoche, the "cloth-hearted," and other assorted slurs (some Imperials still call them Dudmen, an old name for scarecrows).
These people are, physically/visually, like the puppets of Avenue Q, or Meet the Feebles, or of course Henson, etc. Anyone who's known me for a long time will recognize that this isn't a new interest for me in a fantasy context (going back to the early days of the Blue Room and even before that) but it's just that ... some things come into their own, on their own time, and in this case, it's time to get things started.
Thematically, those who know me also know how critical "scarecrows" are to me in RPG design, and the Mantoche manage to be scarecrows on multiple levels, and I've really loved writing about them, designing their many roles in Hammondal and in the larger mysteries of the Candle Islands and of the hidden kingdoms of the Thrice-Nine Lands.
But even over the course of the last couple of months, my design intentions toward the Mantoche have changed. Initially, I was (seriously!) considering just stealthing them into 20% of the city's population, describing them in a roundabout way that could be interpreted as living puppet people ... or not interpreted as living puppet-people ... depending on the reader. I was going to imply, in a deniable way, that they are what they are.
But here I am talking openly about the Mantoche. You've perhaps caught the prior glimpses of their existence in the development snaps, but I wasn't being explicit about who they are, as I am right now.
So that's decision one. Decision two:
For a long time I had considered writing Light of the Candle Islands entirely in-voice, which is to say: entirely in multiple voices from within the game world, where every page is a translated artifact of some fictional document, shedding varied and contradictory light on the experience of the setting.
I have long since stepped back from that. While in-voice writing is an excellent way of presenting some parts of RPG design, it's not the best method I have for presenting every aspect of RPG design, and Hammondal is full-bore RPG design that needs every tool I have in the box. It'll do me no favors to force myself into constrained design as a matter of vanity.
There are a dozen reasons behind each design choice, and these two choices are pretty different, but there's one point of overlap, which is just boring old efficiency.
Writing around the Mantoche takes roughly four times the wordcount of just writing about the Mantoche, openly and directly. The direct approach lets me underline their thematic and tactical importance, and lets me get right to the fun of playing them, whether as PCs or NPCs, and there's a lot of fun to get to.
Similarly, for many crucial points about the city, an in-voice method of describing a given piece of design takes from four to eight times the wordcount of just writing it as me, as S. John, and delivering the same payload. I like my books dense with gameable material, even if that makes me more than a little old-fashioned.
These are not new lessons. Every fantasy GM who ever decided to include a pterodactyl but not come out and just say it's a pterodactyl knows the drill, and every RPG writer who loves to indulge in in-voice work does, too. Sometimes, both are worth it (Hammondal still includes in-voice sections).
Sometimes, the decisions, and exceptions, will merge. The Mantoche are, in many circles, a disrespected and distrusted minority, and that is the kind of thing that in-voice writing can express in ways that omniscient writing can't.
Anyway, like the bit about mercantile law, this is what I mean, when I talk about RPG writing and design. Hope this finds you well, and gaming. 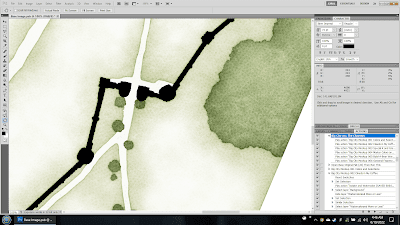 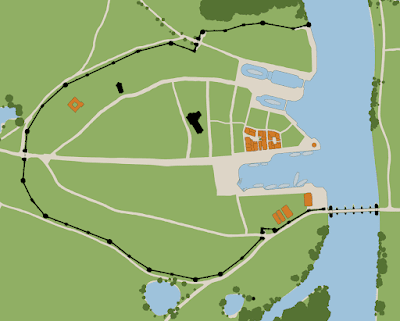 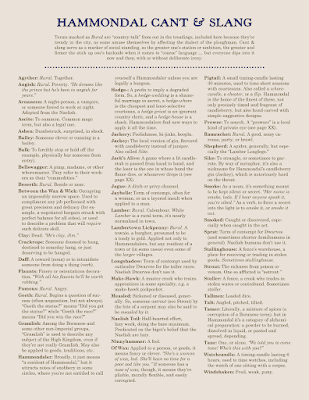 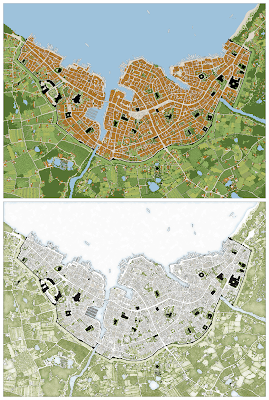