These are some of the qualities I admire in RPG writing, and the ones I demand as an editor:


Without clarity, writing fails. It's the most critical quality, in most respects.

But it's also something most medicine labels can manage. If the highest praise I can muster is "that was clear," it's a bit like saying to an illustrator "That painting of your sister reminds me of your sister," or to an interior designer "This new living room really contains chairs." Like, high-five. You've achieved the rudimentary.


These are three facets of the same diamond. By informative, I mean it doesn't just communicate clearly, it communicates with a lot of bang-per-buck, a lot of stuff per word. It's not uncommon for RPG writing to be so empty it takes 2,000 words to communicate a single gameable idea. I expect from four to twelve, interwoven with many dozens of subordinate ideas, in that same count.

Leanness is about how many channels you're broadcasting on. Poor writing plods along on Channel One, relying on the literal definitions of words, strung in a series, to putter out the payload. Good writing delivers on several bands at once, leveraging connotation, context, arrangement, and what I like to call shapely silences: communicating in the logical space between other assertions.

Confidence is the crucible for the others. When a writer lacks a sure hand, that's when things get flabby: spoiled by qualifiers, stray adjectives, ornate puffery, artless redundancy and desperate pretense.


Here, leanness strides the fourth dimension. In the name of clarity, the writing must deliver the payload without ambiguity ... and in the name of leanness, it needs to do so using the full force of available channels. Good RPG writing soars beyond that, providing more to enjoy as the text is digested.

Layered writing isn't about holding back or obscuring information; delivering the payload is never optional. Layered writing is about shining a light on ramifications, themes and perspectives to enrich characters, adventures, gameplay and the process of reading. The payload is the design; the layers reveal the design's possibilities.


I mean in the smallest moments, in the gentlest ways. I don't expect RPG writing to make me go "HOLY FUCKING SHARKSHIT MY LIL' MIND IS BLOWN" four times a page or even at all, necessarily. When it does, that's about design rather than writing, and I'm not talking design here.

What I'm talking about is dexterity with words and structures, and the artistry of tickling a reader's short-term expectations. I'm talking callbacks, ironic twists, turns of phrase, simile and metaphor. We can name a dozen devices, but they each deliver surprise, and not the SHARKSHIT kind, the tiny-inward-smile kind. When you're writing, you're laying racetrack, and that means mixing the straight-aways with little dips, lifts and the occasional hairpin. Make me feel it.

If you're spotting more and more overlap between these qualities, you're getting the idea.

With a few exceptions (some speed-readers, a few others) people hear the words they read. When I make a parenthetical remark (this one, for example) you hear a shift in tone. When I punctuate or italicize, you ... Hear. These? Changes! Every sentence has a cadence, every paragraph collects them into a composition, and the reader knows the difference between a concerto and some jackass, stumbling in the orchestra pit. Cacophony can be music too ... just make sure it's deliberate.


Information and inspiration are the products of the trade, the one-two punch of game-writing justice. The best RPG writing is celebratory, flush with the fun living in this book and waiting to POUNCE at the gaming table.

I don't mean it's all unicorns doing rainbow glitter-farts; even the grittiest dystopia can be celebrated in the language of gritty dystopias. The idea is: this shit is fun to make characters for. This shit is fun to adventure in. This shit is the shit, and the GM is gonna rock it and the players are going to roleplay the fuck out of it and we're all going to be so hyped and dehydrated that these Doritos are going to taste ten times better after we've gamed all over them.

Or maybe don't sell it so hard. But as the writer, it's absolutely your job to sell it. This is a relay race: you hand it to the gamers, and the gamers run with it, and they'll run it to places far greater than we've ever seen in the playtest rounds, more amazing than our fondest hopes for the material.

Unless we give them no reason to.


Full circle. All these qualities contribute to clarity, to render the payload not only accurately, but indelibly. Good RPG writing doesn't sacrifice clarity, because it doesn't have to. Good RPG writing achieves each of these basic qualities ... or it goes back to the writer in a bath of blood-red ink ... and the next draft begins.

Long-time fans may notice I left a few of my favorite rants out of this article. Not to worry, I'll be writing about (for example) the importance of warmth in future installments. I'll also re-explore some of the above in greater detail. Remember that my inbox is always open if there's something you'd like to see examples for or expansions on; I love hearing from others who care about good RPG writing. I promise I'll write about RPG design sometime, too! 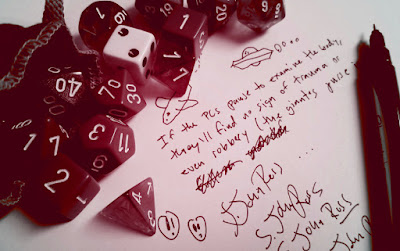