With gamers I know well, a game's subject matter is welcome, sometimes encouraged, to press past the boundaries of PG ratings. Given the choice between sex and violence (American culture's two favorite ways of pressing those boundaries) I'll vote sex 100% of the time. But with newbie gamers (or experienced ones new to my GMing) I'm super extra very careful about ribald content in games, thinking twice and reading the room before I'll even hazard a risqué joke or double entendre.

And so it was, five or six years ago, when I was first introduced to Paula, the romantic partner of another gamer I knew, and he'd been telling me for ages how much I'd like Paula and that I should come around and GM some games for them. Paula was new to RPGs.

Paula's took the the open-ended nature of both Uresia and Risus character creation with gusto, and made a Penguin Sea-Monster PC (an intelligent penguin the size of a tall human who liked to refer to itself as a Sea Monster because that's a fun thing to be) who'd eventually enter the campaign lore as a legend, but this was just our Session One.

They were in the city of Shadow River, over in the Logantown district, passing Death's Dais on the way to a meeting with an important NPC, so the next bit of local scenery was Nectar's Garden, the city's famed Elvish brothel. It was late in the afternoon so the gardens, gazebos and pool outside the great stone house were bustling, and the sounds of laughter and splashing and music were unmissable on the street. Nothing naughty to be heard, just a kind of garden-party atmosphere, but the PCs knew the place by reputation, so I mentioned that.

I was only setting the neighborhood scene, but Paula's interest perked right up, and they insisted on taking a proper penguin peek. I found myself in a precarious position, with Paula's penguin peering into this preeminent playhouse of prurience! Newbie Gamer! screamed the klaxon in my head. Keep it funny, light, maybe a bit sitcom, and they're just in the gardens so it's just a garden party anyway!

To make a short story even shorter, sparkling garden-party banter did nothing to dissuade the Penguin Sea Monster's fascinations, nor did one Elf's recommendation to try the excellent neighborhood alchemist nearby before he shuttered his place for the day. Paula's Penguin wanted very much to sample Nectar's Garden's full menu of services.

So I knew what to do: fade to black. I described some elves escorting said giant penguin into the warmer chambers of the great stone house, amid vaguely-alluded-to sounds of distant pleasures, and I faded to right into the comforting PG-rated black: "And an hour or so later," I offered, "you emerge feeling very refreshed and --"

And Paula would have none of it.

Paula (quickly, with force) stood up from their chair ... planted their hands on their hips ... looked me dead in the eye and said "Oh NO you DON'T!"

Paula was on the verge of giggling, but I could tell it was no joke. "Fade to black" would not be a suitable description of this Penguin's good time!

I was still acutely aware that I was here GMing for a couple, though, plus newbie ... so I improvised a desperate dodge by describing a kind of montage of what was going on several feet above the private room full of Elves and one giddy penguin: slow-motion rubber-duckies soaring and flipping damply through the air, followed by a length of silken cord, a whoopie cushion, and a marmalade sandwich.

To my great relief, this would - barely - suffice. Crisis averted. Game continued. Paula, very much, met.

Paula's been one of my favorite people, and favorite gamers, ever since, and contributed valuably to both the 2nd Edition of Uresia and to Toast of the Town, where the legendary Penguin Sea-Monster remains the only PC in the history of my runs to charge Dolemon Drake with a penguin belly-slide, knocking him into an open sewer-grate.

Paula's also in need of help right now; please consider it. Thank you.

Email ThisBlogThis!Share to TwitterShare to FacebookShare to Pinterest
Labels: GMing, Risus: The Anything RPG, Uresia: Grave of Heaven 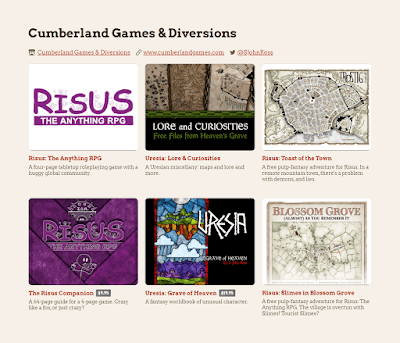 Just a note to say that Sandra and I got our covid test results and we are covid-free. I'm still sick as the proverbially sick dog, with a headache that stabs like a thousand rotating swords, but whatever crud it is, it ain't no 'rona.
So there is that. Hope you're staying safe out there.
by S. John Ross at 5:27 PM