Beyond Compare: Breakfast with Kraygen, Lunch with the Ratman

I love a well-crafted adventure module. When I celebrate them here, I'll feel the need for a spoiler warning, and you just finished reading it.

There are sixty or so published RPG adventures I've loved to some degree, and around two-dozen that continue to inspire and inform my own designs. I'll eventually post about everything in that two dozen; this is about two: Escape From Poughkeepsie (John Nowak, 1987) and A Love in Need (Brian M. Sammons, 1997).

These modules are worlds, genres, and a decade apart. Love is a nonlinear mystery, an atmospheric Cthulhu module intimate in scale and grim in outlook (focused on the fate of a young boy stricken with a terminal illness). Escape is a linear, 'splodey, action-movie quest set in the world of Car Wars via GURPS Autoduel, a snarky run into a nuked-out IBM lab, ending in the camp of a hubcap-barbarian warlord. Once you play them, you'll notice something else: they're beyond compare.


I get a lot of play from both these adventures because of how reliable they are as single-session runs. If you need to fit them to a 4-hour slot at a game shop or convention, they'll deliver without fail. Each achieves that solidity through different acts of game design:

Escape From Poughkeepsie has a linear structure which boils down to three important roleplaying encounters (an outcast nutjob barbarian, a fringe librarian barbarian, and the chief barbarian) decorated with stuff to flesh out the world and deepen the atmosphere (ambush by a patrol, floods of mutant insects, the ruins of a nuked-out lab). The three roleplaying encounters provide clear tent-pole markers for the pace and give the PCs a sure sense of advancing toward their goal. The other, decorative material can be expanded or contracted at need, in real-time, since it's just connective tissue between the trio of critical NPCs ... thorny brush along a trail of clues and social introductions.

A Love in Need has a nonlinear mystery structure (multiple clues and leads from the start, and a small town to explore). Its guaranteed pacing comes from what's happening behind the scenes where the PCs (at first) can't see: there's a ritual happening soon,where an alien wizard intends to take his wife and adopted son away from Earth forever, riding the backs of byakhee (like ya do). This exit will end the series of murders that seem to be the crux of the adventure, but the murders are really just the backstory for the PCs learning of a horrible compromise to keep a child alive, and decide what they want to do about it. Whether they learn enough, fast enough, to make a wise decision (and what a wise decision even means) is up to them, but it's strapped to that ticking clock in the background, providing an ironclad schedule for the adventure's climax.


Both adventures provide NPCs I look forward to roleplaying, and that eagerness puts a lot more spring in my GMing step.

Love features (among others) the earthy, serious Sheriff Tageret, feckless "Feckless Bob" (the mechanic), a part-time smuggler and full-time red herring called John Bog, sympathetic and doomed little David, and above all, it has David's parents: walking magic battery Phyllis (cooking up space-mead in the boardinghouse kitchen, keeping two sets of books out front, smiling cheerfully as she sizes you up for murder), and ... The Amazing Kraygen, an alien sorcerer in human form who'll engage you with on-the-nose philosophical references over breakfast.

Escape has that backbone trio I mentioned, each a juicy plum of roleplaying: The Ratman is the nutjob outcast, with an army of friendly rats, Peter Lorre's voice (the module is explicit on that point), and a vest of nitroglycerine vials. He'll hook you up with Specks, the Barbarian Librarian, who cooks fish over a burning copy of Great Expectations because fuck Charles Dickens (a motif in the book; no really), and he can pass you along to Glenn "The Knife" Knickerbocker, the barbarian chief who wears the shiny disc you're searching for ... but he'll be glad to cut a deal for some entertainment.

On this point, the modules are dancing to the same basic tune, and it's classic rock for a reason. NPCs have a clear function in each design, but none are simply functional. Both modules are structured around Player Character responses to roleplaying scenes. The choices the PCs make in dialogue, and the choices PCs make about NPC behavior, NPC sanity, NPC intentions, NPC well-being and NPC justice, will determine how these adventures turn out. To grease those wheels, each provides characters worth inhabiting by the GM, and every time I prep 'em, I'm hopping in my seat, eager to dive in.

With Agency in Spades


Both adventures have a quality I treasure: I can never guess how they'll go. That's never a matter of luck; it's down to design.

With Escape From Poughkeepsie, you might imagine a linear structure narrows its range of possibilities, but that line is just the trail connecting free-form scenarios within the scenario, a "string of pearls" as Dan Smith used to say (within each pearl? ANARCHY!). In play, the most variable pearls are the endgame (where the PCs know where the disc is, and must choose their own brand or blend of diplomacy, sneakery, trickery and thuggery) and the first major encounter, with the Ratman (I've seen parties destroy him, work around him, run screaming from him, and best of all: one party basically adopted him, because they pitied his status as an outcast).

In A Love in Need, the web of clues is nonlinear, but boils down to a single problem: an innocent boy is alive because his parents are willing to use an alien magic murder-cure to keep his disease from killing him, resulting in years of quiet slaughter of loners passing through the tiny town, seeking shelter at the boardinghouse. I've seen groups stop the murders in ways that doom the child, volunteer their own lives to extend his, try to rip him away from his murder-curing parents to seek another way, send him to space without his parents (I like to think he grows up to be Space Tarzan) and even dive immediately into their chemistry sets to find their own cure. I've also seen them get their faces chewed off, get the sheriff needlessly slaughtered, take the space-mead and run, or just go all guns and dynamite and it's bits of byakhee all over the lawn.

These adventures demonstrate three clear components to ensuring infinite variety in the face of a finite quandary. The first is a matter of omission: neither adventure presumes a solution to its central problem. The PCs must devise their own path. The NPCs have their own ideas about how things should end (the Kraygens intend to whisk David off to an alien world; the Knife is willing to give up his prize disc if the PCs will send a champion to battle his own) but the designs don't lean on the NPCs actually deciding anything: it's all squarely in the laps of the PCs.

The second ingredient gives backbone to the first: In addition to no solution being presumed, no solution is optimal. Even if the PCs were to gain omniscient knowledge of the ramifications of every choice, there's no clear "best" answer to either adventure's core questions. In the case of A Love in Need, the quandary is moral and ethical with a side-order of logistical. In the case of Escape From Poughkeepsie, it's logistical with a side of moral and ethical. In both cases, how the PCs feel about the NPCs will also exert a lot of gravity (some people find Kraygen and/or the Knife basically likeable, others find them intolerable, and this can cloud the practical shape of the question).

The third ingredient is: the PCs likely won't gain omniscient knowledge of the ramifications of every choice, and what the PCs do learn depends on their choices and personalities. This provides an explosive multiplier to the first two ingredients, because the PCs, with an incomplete understanding of the problem (but differently incomplete compared to other groups), facing a problem with no optimal solution, and where no solution is presumed to funnel their actions ... I'm running out of commas, here. To restate the upshot: I can never guess how they'll go, and that's well-crafted adventure design.

And They've Got Walkin' Shoes


I run a lot of different games across many worlds, genres, modes and styles, so this is a big deal to me: both of these adventures adapt cleanly and simply to genres and worlds beyond their defaults.

Of the two, Escape From Poughkeepsie is the most versatile, because it doesn't depend on any kind of supernatural anything (just the existence of a tribal group that might possess something unique the PCs need)... so I've adapted it to hard-science-fiction, pulpy space-opera, Paranoia, Star Wars, Star Trek, the World of Greyhawk, the wild west, the Marvel universe, 1930s crime-drama, my own homebrew fantasy world, and Bunnies & Burrows. Just find your metaphors and zoom.

A Love in Need depends on a supernatural gimmick (the alien magic murder-cure), but alien magic can easily become superpowers, psionics, exotic technology and plain old fantasy magic, so I've adapted it to every genre where realism can take a scenic hike (including multiple superhero universes, five different fantasy worlds, one cyberpunk setting, and several forms of soft-science space-adventure). Most recently, I wove it into two other favorite adventures in my local fantasy campaign, so if any of my players find this blog: nervous laughter and hello!

How does a module achieve this level of adaptability? Strong, transparent structure. Both modules can be condensed into simple moving parts attached by clear lines or skeins of clues, where every part either (A) serves an obvious function or (B) clearly serves as decoration/atmosphere. Once you recognize what the pieces are and what they're for, it's easy to send them to wardrobe for a costume change while you re-dress the sets. They each lay something simple on the table, trusting the process of roleplaying to snarl them into something unique.


Alas, neither module was published on its own, which makes them both more obscure than they deserve. A Love in Need is wedged into the middle of a 1990's CoC collection called Secrets. Escape From Poughkeepsie is tucked into the back of the AADA Road Atlas and Survival Guide Volume One: The East Coast. You can find either by rummaging in the right used bookshop or dusty box under a dealer's-room table, or snag them in PDF form from their respective publishers. They're a good time. 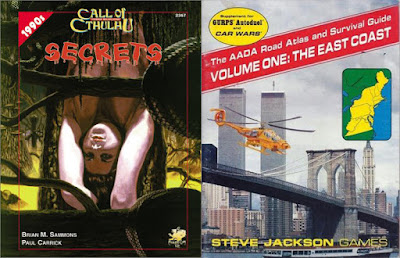 In a "Beyond Compare" post, I contrast the awesomeness of two or more RPG works. This first installment appeared on the prior blog; there are more on the way.