If you're making a new RPG character and you're desperate for a G-rated curse word the character can utter as a trademark, you could do a lot worse than "Aw, stinknoodles." 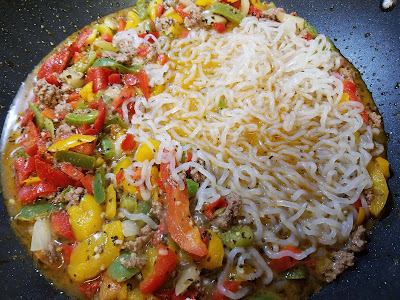 But stinknoodles – that is to say, shirataki – have become pretty important to our household diet, lately, so I figure I'd write a little about them.

Due to ill health, Sandra and I have some pretty serious dietary restrictions ... we have to limit calories, carbs, saturated fat, cholesterol, sodium ... pretty much everything you can restrict, we have to restrict.

Shirataki noodles are pretty much 100% indigestible, in the good way, so they have something approaching zero carbs in impact terms, and virtually no calories either, so they're not food ... they're a kind of fake structure you prepare with food, as alternative to starchy, delicious, starchified starchlike starch.

If you're watching calories or carbs, consider keeping shirataki on hand. The texture doesn't resemble flour-based pasta, really – it's got more of that bungie-cord elasticity, closer to something in the ramen/udon territory. It's also virtually flavorless, so again: not food. But, a pretty impressive way of adding a pasta-oid, pasta-esque character to a dish of veggies and/or meat.

Because it's not starch, the texture doesn't really change. Where regular pasta gets progressively softer by cooking, shirataki just ... doesn't. This is strange at first, but becomes convenient once you get the hang of it. It makes single-dish cooking easier (as shown in the pic, where I'm getting the noodles hot next to some of the sauce components, all at once).

There are several brands available, some with a bit of added tofu ... and as near as I can tell, the only point of the added tofu (which adds a teensy calorie or two, nothing to worry about) is to make the noodles more opaque? I think? They don't taste any different (which is to say, they continue to lack any flavor of their own), so I think it's just some weird marketing thing where the assumption is that American buyers want their noodles more opaque. If you know a real reason, let me know.

The thing I find most interesting about the different shirataki brands is how they address the stink. Because these are stinknoodles. They're typically packed wet, and the water smells like dog poop having a stink-contest with rotting fish, in a battle royale where everyone loses.

Or, as the Nasoya label says, a "mild earthy smell."

Or (my favorite) the House Foods brand warns of the "authentic aroma."

Stinknoodles pretty much only stink when you open them. When rinsed and added to actual food, the stink fades rapidly, and vanishes entirely by the time you serve them.

But for a shining moment, you can breathe in that earthy authenticity.
by S. John Ross at 4:19 PM