My Memory Has Peed

Okay, so I'm dashing this out in the moment to record what just happened in my brain because my brain is ridiculous.

I've got a wallpaper right now that's a screenshot from Dishonored 2, because of course I do, and it's a night shot alongside the Dreadful Wale, looking in to the lights of Karnaca. 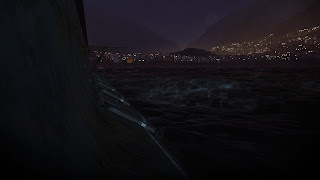 I like it as a wallpaper because it's a bit dark and because the hull almost frames my left-hand Windows icons (not shown), none of which is relevant.

I'm staring idly at the wallpaper deciding if I should work next on Intruder Moon or one of my Risus projects or the Shadow River map or something else, and I notice the little areas of flat white foam along the surface of some of those waves in the water, and I think "that's a nice little bit of water-detail" and I briefly wonder if the water surface has just one texture or multiple textures and if it's multiple how they're layered and so on ...

And then my brain just jumps to something I haven't consciously considered since approximately the 5th grade: a pen-and-ink-drawing of ocean water in a cartoony style that had cool little arcs in the linework to indicate those same flat areas of foam or comparable variations in the water's reflective surface. And I remember it was an interior illustration from a book-and-record set starring Popeye.

And I remember that this illustration was the work of an artist named George Peed, because (A) the audio part of the book-and-record told me so, every time I listened to it and (B) Mr. Peed had a very clearly-legible signature on most of his work, and I had noticed it also on some of my other children's records, back in those merry days of vinyl.

And I'm stunned at my weird-ass memory for suddenly remembering George Peed when I know for certain he's not crossed my mind since 5th Grade, in my bedroom back in Cumberland, Maryland (which, if you were wondering, yes).

So I grab my phone and Google him because I'm certain the Internet will have George Peed fan-pages or something (right now as I'm typing this it occurs to me to look for Roy Doty as well, because apparently my brain was hoovering up illustrators' names as a child and I just never paid any attention to how much attention I paid). And yes, the Internet does.

But that's when the actual weird part happened. It occurs to me, right now, in the winter of 2018, that back in 5th Grade and 4th Grade and prior grades when looking at all those George Peed drawings, it never occurred to me to find his name funny.