(with some awkward writing, assisted by rum)

Here's a Christmas memory with some Cthulhu in it. My friends all know this one; my friends out in yon Internet should know it too.

It was about thirty years ago. We lived in a rental house (low 400s on Miller Boulevard) in Havelock, North Carolina within easy driving distance of MCAS Cherry Point (where my father was stationed) and easy walking distance of Reader's Haven, the used-books/comics/game-shop where I stationed myself much of the time (in the "Slocum Village Shopping Center," a sad miniature strip-mall on the west side of Park Lane leading up to West Main). There were also two convenience stores and a small public library within easy hoofing, so it was a nice little spot to be a newbie gamer with a burgeoning research addiction.

It was to be my first Christmas completely alone. My parents had broken up years before, and my father had a long-term girlfriend in Virginia, and he'd decided he wanted to spend Christmas with her and her kids that year, leaving me the run of the house.

I oscillated between feeling sorry for myself for my first lonely Christmas, and feeling like a mouse in the proverbial cat's-away position for my first Christmas To Do Whatever I Wanted, but mostly I just felt the alone parts. I had some gamer-friends from school and from the shop, but they all had their own families to deal with and nobody needed an extra teenager hanging around, especially those weird ones with their TARDISes and X-Mens and things.

I spent Christmas Eve constructively (doing some game-mapping and comic-book reading and MTV-watching) but woke up on Christmas morning feeling a little under the weather both physically and emotionally. While I was only a teenager, I had, from my perspective, a lifetime of experience of Christmas Morning being this joyful, family thingy which culminated in food.

I was the cook of the house (Dad could make ice cubes or sandwiches if you left him a clearly-written recipe), but cooking a Feast For One didn't feel legit, so I made some Rice-A-Roni and a chunk of Mooki Meat (an oval patty of ground beef, seasoned with such eccentricity that it had to be the work of the infamous Mama Mooki, an imaginary cook I made frequent reference to because I was a weird teenager).

And then I got my jacket on, and walked to the base library. I'd read in the base paper they'd be open on Christmas Day, and being at the library (which I loved) sounded way better than just belching up Mooki Burps in an empty house on Christmas.

The walk did me a world of good. My under-the-weather glum got replaced by full-blast enjoying-the-weather brisk, and it was a walk of about 2.5 miles, which I suppose took me an hour. I enjoyed that route, in through the main gate (as a dependent, I could get in with my Marine Brat ID), past the base McDonald's (Google Maps says it's still there).

I didn't know what to expect. Being open on Christmas wasn't normal for the library; it's not very normal for any library, but I would learn that two of the librarians had just realized they had no big holiday plans, so they decided they'd donate their time to offer a little cheer to Marines who couldn't get home for the holidays.

So the scene was this library, with only half the lights on, and two librarians, and four young Marines far from home, and me. And, with further thanks to those two kind librarians, there was a tray of cheese and crackers, and a carton of eggnog, and some punch.

And I could barely keep from crying, I was so grateful. We sat in a circle of random library chairs and introduced each other and just chatted about nothing in particular and Christmas in general and we just thanked the librarians over and over.

I didn't keep from crying, exactly. I just held off 'til I was alone in the stacks, because these two angelic librarians didn't stop at cheese and crackers and refreshment. They said, if we wanted, we could check books out, too.

I picked two: one of the time-travel novels of George Alec Effinger, and one of the old Arkham House collections of H.P. Lovecraft stories.

I'd already been an Effinger fan for a few years, having consumed many of his short stories in the pages of IASFM since my first subscription around '84 (stories like White Hats and the Beast From One-Quarter Fathom, if I recall), but this would be my first time reading his novels.

Lovecraft, I'd never read before. But I had been reading a certain Chaosium roleplaying game, and Call of Cthulhu was stern and clear: I shouldn't consider GMing the game until I'd read at least half of [LIST OF RECOMMENDED STORIES] and lo and freakin' behold, this Arkham House book contained right around half of those, so: score. I could finally, legally be a Keeper.

And as the librarians ran the books through the magnetic thingamajig and I shook the hands again of the young Marines and thanked everybody and wished everybody a Merry Christmas, we just stood there as the lights went out, recognizing that without a doubt, we were having one. And it became the best ever, in a way.

The walk home was a mixed bag. Those two and a half miles felt a bit longer with only the empty house to get back to, and it was later, and darker, and colder, and I was carrying books. Plus, that under-the-weather-feeling from earlier? Turned out it wasn't just me being glum, it was me feeling the first pangs of some kind of viral crud.

My bedroom was on a corner and got colder than dad's, so I decided I'd go ahead and swipe his for the night, with blankets from both to keep warm, and I curled up all snug, getting sicker and reading Lovecraft stories and then falling asleep to my first-ever genuine HPL nightmare. Pretty sure it was The Picture in the House that did it. Here, young Sir, don’t git skeert. Victuals, etc.

So maybe not the best ending, and maybe not the best beginning, but right there in the middle, it was a beautiful Christmas. I'm not done being grateful for it, and I don't plan to be. Thank you, angel librarians. Thank you, young Marines with your stories of home. And even thanks to the pulpiest of the pulpsters for giving me nightmares, and the great and lovely Effinger for that novel and so many others. Still so very grateful.

Hope today finds you well, whenever today turns out to be. 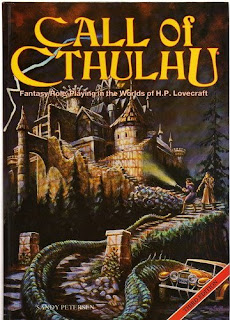