It was a trailer without a trailer-park; set on its own bit of land in the backwoods of Virginia.

It was my very first anything resembling an RPG.

I owned a set of polyhedral dice. I just thought they were cute; pretty plastic items to make strange dice-games from. My great-grandmother bought them for me at a Waldenbooks a couple years earlier, from a checkout display box. Magic Gemstone Dice, or somesuch.

I'd shown the dice to my buddy John Embrey at school, and he was like "Oh, you have D&D dice!"

"I do?" Internally, it was more like "Grandma would never have bought me these if she knew that."

John offered to introduce me to the game. He also had some Gamma World stuff and more, I think. He didn't get a lot of chances to play, so he was excited about it.

John's place was the trailer in the backwoods. His dad was an ace wild-turkey hunter (the actual bird, not the booze), and his mom was a good cook, and they were always good to me (including introducing me to the best coney-dogs I've ever had, but that's a tale for another time).

John handed me a character sheet with a character on it (nothing so formal as a pregen, just a leftover sitting in his folder) and ran me through a couple of rooms in Lawrence Schick's White Plume Mountain. 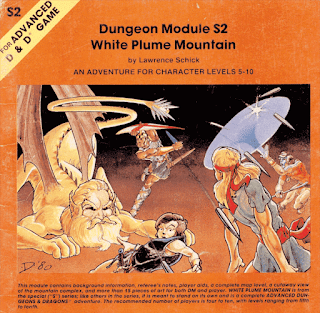 But in that hour or less of D&D, there was a magic moment. I was threatened by a Mimic. You know the setup: there's a "treasure chest," so I'm like "Okay I'll open that treasure chest" and he's like "No you don't! It snaps its teeth and growls and tries to eat you!" and I'm like "mother fuck!" and he's like "baha!"

Oil. There's a flask of oil. And a frickin' torch.

"Man I'm gonna douse it with oil and set it on fire."

And he has me roll something and he's like "Yeah okay it burns and dies" and I'm like "YEAH" and the Rocky theme is playing in my head and I'm victory-lapping around this Mimic and in that moment, in that embarrassing, ignorant moment, I am 100% sure that I just invented that shit, like nobody else in the history of D&D ever thought to douse something with oil and burn it, and I just broke the fucking game and they'll have to make a new one because they didn't count on S. John coming down and breaking their goddamn game with his fucking OIL GENIUS.

And John, he could see this, and he just lets me believe it, and more important, he lets me play some Mario Brothers, because he's got video games and I don't, and he's really cool that way.

A few years later, when I became a DM and knew how Mimic stats and initiative and hit points and weapons worked, I'd look back and see all the things that John Embrey left out of that encounter to make it work, including his tactful omission of the simple phrase "Yeah, everybody does that with oil." And then, I took that lesson to heart, and was a better DM for it.

But I still remember the rush of being an oil genius. It was nice. I like to think that if we'd ever finished that module, I would have traded Black Razor for a TON of oil back in town.
by S. John Ross at 5:54 PM