Law of the Land

I'm still exhausted (in a good way) from digesting the new Avengers movie, so that's as good an excuse as any to rescue this post from the prior blog.


The Gangster! RPG (1979, Marinacci & Petrone) has, in many ways, earned its rest in obscurity. The writing ranges from "functional" to "painful," it scrapes itself thin across more history than it has room to support, and it's just generally more charming than gameable. And it is charming, but ...

Gangster! managed to commit one of the most amazing acts of player-handout design in the entire history of our hobby, and it did so in the form of Book 2: Patrol Guide and Laws of the Land. I can't begin to praise this little booklet highly enough, but I'll give it a go. 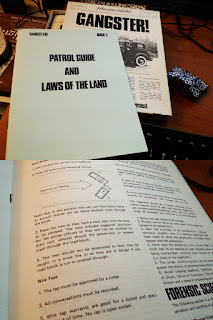 You know crime-drama cop clichés about "the book?" He's a by-the-book cop. Let's throw the book at 'em. This game went to the trouble of including the book. You can't do a police procedural without some inkling of police procedures, and here they are. Book 2 is a micro-compressed library of everything from the deportment of an officer to the consequences of crimes.

And when I say it's micro-compressed, I'm praising it so hard. This isn't just a gimmicky presentation of some necessary game information. It's lean enough, focused enough, and sufficiently well-organized to be used in real-time, as a functional gaming prop, without putting the tiniest bit of drag on a session's pace. Everything is boiled down to spare, role-playable basics, and the result is like the perfect sharpening of a blade. With this book in their hands, the PCs will be able to slip into the role of a police officer in a way they'll find more satisfying, more believable, and more fun. Just like that. It's an amazing piece of work.

Had the designers fussed even a tiny bit more over making it more realistically detailed, or packed it with qualifiers by era or location (the game promises to cover 80 years of crime fighting in its two slim booklets, and naturally it can't really do that), it would have been crippled. Instead, it's lean, confident game design of the highest order.

Gangster! is, as a whole game, mostly just a curiosity, a minor milestone in the 1970s awakening of the hobby, the rapid darting outward into new genres, to see what might stick. But it's a game any designer might learn from, and Book 2 is the reason why. If you happen on a copy, pick it up - because you'll find this a useful prop not only for its own game, but for any number of games you might set on Earth at any time in the last century and change.﻿
by S. John Ross at 3:52 AM