I have Strong Opinions on matters of fantasy cartography. No shock, I know! One of those opinions is that you should never draw to fit the paper. The way I fight that tendency (because it can be really hard not to) is I do a lot of preliminary work on a much, much larger canvas than the target output.

One of the other towns on the same island as Hammondal is called Choragus, and it's not nearly a "city" by any definition, but it's Calembour's only other seaport bigger than a fishing village, and it's got drydocks for ship repairs and shipbuilding, so despite its modest size and relative youth, it's pretty important. I'm just beginning to map it as a kind of brain-break from writing Hammondal's book. The map began like this: 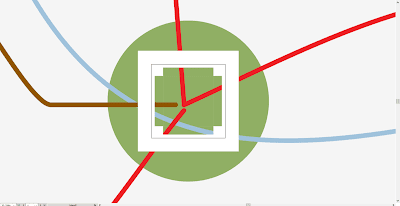 Pretty humble stuff; it looks like I'm playing one of those casual videogames about building public transport ... which isn't too far off from the kind of abstract thinking on display. The red lines are major overland roads (the roads maintained and patrolled by the prince); the brown line is a secondary overland road (the kind sort-of-maintained and sometimes-patrolled by more local administrators). The blue line is the course of a river about to dump into the sea a couple of miles to the northwest.
These are just details from the Calembour map, blown up to scale and placed on a large wheel of green I call the Potter's Wheel. It's about 25 inches wide (a bit more than a mile in scale). Meanwhile, the actual final map will fit somewhere on a letter-sized sheet.
That white cross-like thing in the middle is a masking mockup showing me potential "live areas" of the final map. Neither its position nor rotation are final ... currently everything is perfectly north-oriented. But the area inside the cross shows us where the map might end up someday. Anyway after about a day it looked more like this: 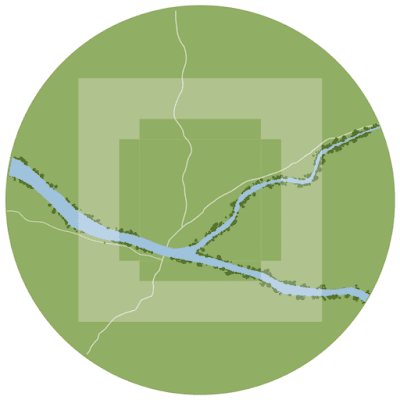 I've let the phantom cross go a bit transparent so we can see more of what's going on. Now I've got a semi-final take on the natural shape of the river, and I've added a local tributary that's too minor to have appeared on the Calembour map. I've also drawn in those major roadways and it looks a bit more like a place. Then I let it sit for a couple of weeks because I was busy with Hammondal proper.
Tonight I started to really break ground (and dredge river): 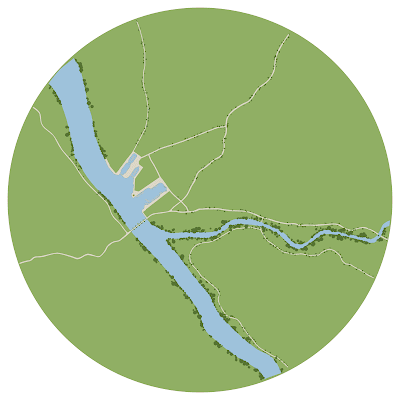 I've widened the main river a bit, drawn in a couple more (local) roads and what might be a couple of town streets by the time we're done, and I've begun mapping the port and the three drydock bays (currently shown filled rather than drained because it feels clearer, but who knows how it'll go in the long run). There's also a single orange building (the river beacon), and some placeholder boats (carefully excluding any of the Boranese hull-shapes, since it's illegal for them to dock here; Hammondal has a monopoly on dealing with the Boranese).
But what this capture really shows off is the point of the Potter's Wheel: I can spin it, and I do, constantly, because another Strong Opinion I have is that you should never keep drawing from the same position relative to the map, or relative to North or any other direction, because doing so can exert a weird lateral gravity on how you see and design a town, and I don't want that ... so, (especially during the earlier stages) I constantly, randomly spin the entire map and just as often flip it (make it a mirror reflection of itself) as I work. Here, it's been returned to something nearish the north-oriented original, but visibly canted ... but I was spinning it constantly as I went.
Anyway that's the Potter's Wheel method. Eventually, as the town takes shape, I'll begin to see where it's really centered, and what it's really shaped like, and the final framing will take that into account, but until then I don't let the shape of the paper, or any specific orientation, drag the map down.
And it's just fun to spin it.
by S. John Ross at 4:38 AM