Today's new font from the Cumberland Fontworks is called Guacamole Quickstep. It's simple and huggy and nothing-fancy. I dig it: 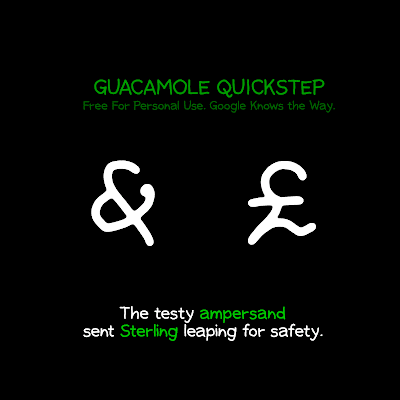 It's got a nice on-screen legibility, even at smaller sizes. I'll probably use it for character sheet graphics, and maybe some Risus captions sometime ... it's got a similar visual personality to the Little Cartoon Bastards. It's probably what their handwriting looks like.


It's the first font I've ever drawn entirely on my phone, which is no shocker nowadays (phones have some top-notch doodling apps so there's a lot of good work being done on those little screens) but it's a personal milestone in expanding my mobile productivity. I've used phones for LCB art before (some of the pieces in Toast of the Town), and for writing small sections of my books and modules and things (Toast again, plus other titles still in the works). The process of doodling the font was very comfortable, so it ended up with an extended-character set, all of it pretty thoroughly kerned. 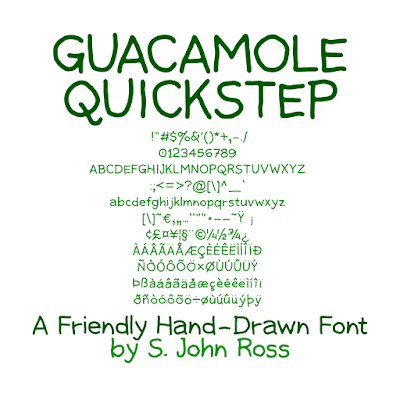 
Sandra's glyph-mapping that new one right now in the laptop across the booth from me.

That's one of the other cool things about Guacamole Quickstep: it's the third new Cumberland font this month (following Cynocel Poster and Monesque), because Sandra's now (as I like to say it) slaving away in the font mines or (as she likes to say it) having fun helping husby with fonts.

So, if you're happy to see new Cumberland fonts, you have Sandra to thank for a lot of that happiness from now on. She's shouldering the glyph-mapping portion of the production process, letting me focus on the designy-and-kerny parts, and it's a productive formula, fueled in large part by Sandra's almost giddy enthusiasm for it.

As always, fonts from the Cumberland Fontworks are available out in the wilds of the Internets and tend to spread from font-website-to-font-website like embers in a forest fire. Google knows the way. I'm also experimenting with posting a couple on my DeviantArt gallery but I'm not sure how I feel about that; they might vanish by the time you read this. Dunno.

Equally as-always, my inbox is open if you'd like to chat about fonts or, you know, games or food or whatever. Hope this finds you well.
by S. John Ross at 9:48 PM