Another recipe rescued from the Blue Room, a season-appropriate follow-up to the last one:


This is a pretty old-fashioned recipe. No prefab 'stuffing crumbs' - just fresh homemade bread with better flavor, texture, and price. Simple ingredients and simple preparation. Take this and run with it: modify, add, and experiment to your heart's content, and to the joy of those you love.


Melt butter in saucepan and sauté onion, thyme, sage, salt and pepper until the onions are barely tender. Place celery (uncooked) and bread cubes in a very large mixing bowl.
Remove onion/butter/herb blend from the heat and add the cold liquid to it. Pour mixture over bread/celery mix, and blend thoroughly and gently with a wooden spoon or wooden spatula (or a pair of them, tossing it like a salad).

Bake in greased foil or casserole pan(s) for 30-60 minutes in a preheated 325-degree oven, until the stuffing reaches an internal temperature of 165F or has the crust you want (whichever comes last). If you're feeling old-fashioned, you could also stuff a turkey with it and bake it directly in the bird, but most folks agree it's safest to bake the dressing separately. The recipe makes about a gallon of stuffing, enough for a family of eight as part of a holiday feast.

Fresh (or gently stale) homemade bread is ideal, and I recommend it strongly. If you're uncomfortable with bread-baking, however, any bread with a bit of substance to it can work. A reliable supermarket substitute is plain bagels. Seriously, bagels! Bagels tend to have more body than the loaves of bread they sell at most supermarkets (many of which feel firm at the crust, but are just glutinous, plastic air on the inside and which lends stuffing an unpleasant texture). If you have access to a good bakery, toss in whatever else feels right: mixing in some pumpernickel or rye will change the flavor, but sometimes that's just right. Cornbread is a great addition, too, as are stale biscuits/soda bread, even some kinds of crackers. Dried prefab "stuffing crumbs" are the work of Beelzebub and should be avoided, except in the context of heavy metal concerts, where the works of Beelzebub are welcome and appropriate.

One large onion is good for about 2 cups chopped, and 1 bundle of celery makes 3 cups chopped. A turkey-sized roasting pan, devoid of poultry, can handle a heaped-up-piled-up double batch if you're seriously into your stuffing. The thyme/sage blend can be replaced with a quality brand of "poultry seasoning" if you prefer. What's in ``poultry seasoning'' varies widely from brand to brand (some of the sketchier brands contain cheap filler). McCormick's is a pretty good blend, favoring thyme.

Optional Seasonings: The basic recipe takes care to avoid over-herbing or over-spicing, but that doesn't mean you have to! The addition of any or all of a pinch of marjoram, 4 tbsp lemon juice, 2 tsp celery seed, 1 1/2 cups parsely, 3/4 cups bacon bits, 1/4 tsp cayenne, 1/2 cup chopped leeks (replacing onion entirely), "seasoned" salts replacing some or all of the plain salt, 1 tbsp Chinese Hot Oil, 4 tbsp olive oil or 1 tbsp savory will certainly enhance it.

Further Additions: Putting a little extra substance in the stuffing is good. Try an egg, or 1 cup chopped mushrooms, 1 cup of diced ham, a handful or two of chopped nuts, or 3 slices of chopped, crisp bacon, or double or triple any of the above! Diced, cooked giblets work well, but I think they're better used in making gravy (below). Some hot italian sausage (cooked, then chopped and distributed as thoroughly as possible) does nice things, too.

Chilled Stuffing: Make the ``raw'' (unbaked) stuffing a day in advance, and keep chilled in the refrigerator overnight before stuffing the bird and/or baking the stuffing. This allows the flavors to blend, and can save prep-time and counter-space on a busy feast-making day.

Charlie Brown Stuffing: Don't knock this 'till you try it, and the kids will love you for it if you remember to tell them what they're eating: Add 1/2 cup crushed potato chips and 1/2 cup broken pretzel sticks to the sauté at the same time the broth is added.

Stuffin' Fluffin': This stuffing has some backbone. I'd call it "middleweight," the kind you can reasonably slice when it's chilled. If you prefer it drier and fluffier, cut the butter and/or liquid down, to as low as half the given values. If you like your stuffing much denser, increase them by 50% or more.

Stuffin Muffins: Bake the stuffing in muffin/cupcake pans; one batch will make about 30 half-cup croquettes (or 24 heartily-filled ones). This will reduce baking time by 10-20 minutes, depending on how crowded the oven is. This is my favorite way to prepare the stuffing lately; it makes portion-measuring super-easy and increases surface area (so there's more crusty-bit edges). 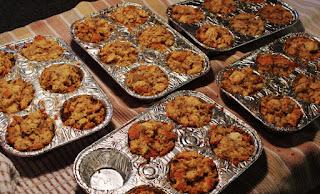 Place giblets and/or neck in a pot with onion, thyme and pepper. Add the cold water. Bring to a boil and skim, then simmer, covered, while the bird roasts.
When the bird is done, strain broth into a bowl and discard solids. Salt broth at this point if desired; I recommend 2 teaspoons to start (commercial-standard saltiness would be 3, but always start a little low ... it's easier to add salt than take it away). Add drippings or milk to the giblet broth to bring it back up to exactly 6 cups of fluid. Collect 1/2 cup of pan-drippings from the bird and make a roux with the flour. Cook the roux lightly and add the broth (slowly, a half-cup at a time) to it to make gravy. Serve immediately; giblet gravy brings the awesome to dressing, sliced turkey, and mashed potatoes!