If all goes well, I'll be posting new RPG writing workshops to Rolltop Indigo on a regular basis. All of them share a few ground-rules and basic ideas. This article explores those. Read this before your first exercise, and revist at need.

This is an RPG writing workshop, not an RPG design workshop.

In real life, RPG creators are often writer/designers, blurring the line between two interlocking, but distinct, skill-sets. In this workshop, there’s no design allowed, because we’re isolating and exercising our writing muscles. For that purpose we’ll draw a bright white line instead of the usual blurry one.

Designers determine the facts. ALL the facts. Doesn’t matter if it’s a fact of the rules, a fact of the gameworld, a fact about a particular NPC or that NPC’s third cousin’s left sock. The facts are, collectively, the design.

Writers express the design, delivering the facts to the reader, in a manner suited to the book's mood, themes and intended audience.

Without the writer (or without the writer side of each writer/designer), RPG books would be bone-dry lists of facts. Kind of like those science-fiction food pills with all the essential nutrients, but none of the flavor, texture, sauce or heat. Each workshop exercise begins with a deconstructed food pill, like this fragment of an NPC:


For nine grueling cycles, Captain Burns has served the Patrol, exterminating the hated Zarg … and doubting what remains of himself.

Duty, and hatred. The twin suns searing at the heart of Captain Burns. Duty, to the Patrol! Nine cycles of dutiful slaughter! Hatred, for himself, for his adversary. He’d been a man once, more than just an instrument of death. As each foe falls, they bear witness to his hatred, bone-cold and soul-deep. They see hate for the Zarg, oh yes, but hate, too, for himself, for living to kill again.

Each of these delivers the same design, the same facts, whether implicitly ("endured") or explicitly ("nine cycles of killing the enemy").

The first is straightforward, the second reaches for a bit more drama, and the third one is desperate, pretentious and hokey, but … still delivers the goods, eventually. Any of them might be right, depending on the book's intended tone. Consider the choices on display here, in wording, structure, and emphasis. Note the "bookend" repetition in the second example. Note the economy of the first.

None of the three introduce new facts, though the third trowels on lots of characterization and opinion and just a hint of speculation. That’s fine. Characterize, opinionize as much as you need to. Metaphorical twin suns aren’t added facts; the reader isn’t expected to treat them as gameable, literal suns.

Captain Burns is presumably human. We could say that he's feeling the loss of his humanity, if we wanted to phrase it that way. That’s fair-game embellishment. We don’t know if a “cycle” is more like a year or more like a month or maybe some kind of military tour, but nine of them are clearly too much Zarg-popping for one well-meaning Captain. We know he’s well-meaning because wrecking Zargs is wrecking him. He’s got a conscience.

Embellishing is fine when it’s based on that kind of inference. Don’t beat yourself up on that point, play to the spirit of the rules. Nobody wins or loses in this workshop, so you can only cheat yourself. Write, don’t design. I understand how difficult it can be to suppress the natural tendencies of the writer/designer, how unnatural it feels. That’s not accidental.

The example above is also unfair. We could do so much more if we knew the contents of prior passages! Which we would totally know! If we knew why Burns hates the Zarg, we could call back to that. If we knew something of Zarg religion, we could allude to sending them to the smoking tunnels of Glurth or whatever they call their post-war afterlife (maybe it’s more like churning their soulmeats back to the astral meat-mountain). There’s a lot of unfairness baked into this brief example. I promise: there'll be room for much more in the actual workshop.

In each exercise, the imaginary designer remains unapproachable, absent, uncooperative, inflexible. What a tool. I mean literally it’s a tool.

Will these exercises feel like real RPG writing? About as much as a treadmill feels like a real hike. It’s exercise, not a holodeck. But it will isolate and work those muscles, and offer some perspective, too.


When I post an exercise, everyone has 72 hours ‘til deadline: three calendar days to write and send me a short passage per these general rules, plus any specific rules attached to the exercise. Every exercise is open to every reader. There's no sign-up sheet, and no obligation: just an open invite. You can just decide to join in; please do!

Email submissions within the body of an email to blogmail@cumberlandgames.com with the word WORKSHOP somewhere in the Subject header. No file attachments. If you don't use Rich Text email, that's fine: indicate italics and boldface (if needed) with any normal kind of plaintext markup, whether it’s <B>bold</B> or *bold* or what-have-you.

I reserve the right to reject or ignore any submissions, but I can’t imagine I’ll ever need to. That's not a dare.

A few days after posting each exercise (sometime past the 72-hour deadline), I’ll post the results. They’ll be presented anonymously, with no names attached. I’ll write a bit about them, but my comments will be parsley compared to the steak of the submissions. You’ll see what I mean. Just participating, then observing the differences, will show you more than my critiques and labels will.

How do I know? I’ve done these a few times before. It began with live workshops at cons (which worked well, but were limited in scope) then moved to experimental online versions (which worked well at first, but required too much commitment across multiple exercises … not unlike an RPG campaign losing players to real-life scheduling). This new version is identical at the core, but it’s now zero-commitment (you can participate in just one, or none, skip a few, come back, doesn’t matter), and totally anonymous rather than the semi-anonymous approach of prior versions.

As long as I get at least five submissions per exercise, I’ll keep ‘em going for the foreseeable.

And that's it! That was a lot. Sorry. I’m excited. You excited? See you in the exercises!

The Legalese: participants retain all rights to their own submissions. By submitting, participants grant me (S. John Ross) perpetual permission to post them as anonymous results of the exercise, here on my blog or on my homepage (The Blue Room). No further grant of permission will be presumed (for example, I’d need to approach you separately to beg permission to use your examples in a book about these exercises, and you’d be under no obligation to grant it). 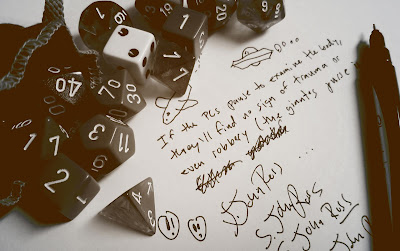