The clank and clatter at the Cumberland Games garage is all about Encounter Critical lately, as I prepare for the first test campaign for Intruder Moon, an EC campaign module of special weirdness! Part of my "mood prep" was a fresh viewing of Damnation Alley, and that gets me thinking about Damnation Vans.

Like most things EC, the Damnation Van is less a thing than the hint of a thing, a riddle about a silhouette. All we know is the name, and that for fifty thousand Gold Credits our Player Characters will be treated to "well equipped travel" with fairly modest odds (15% chance) of getting a lemon. We also know it's tricky (6%) to outfit a whole army with them, though we don't really know why Hank thought that rated a column on the chart to begin with.

But what's a Damnation Van, really? What kind of features is it "well equipped" with? How is it fueled and maintained in the wilds of Vanth or elsewhere? How many PCs can live in one?


Damnation Alley features two of these monsters, called simply Land Master I and Land Master II. The coolest part about the Landmaster is that it was a for-real, practical effect, a working vehicle constructed by the late Dean Jeffries, himself a bit of a legend when it comes to fantasy vehicles for Hollywood. The other coolest part is that the funky triple-wheel design was also functional, with each wheel separately powered for conquering rocky terrain. In real life, there's only one Landmaster (the film did a Patty Duke on it), and you can pay it a visit in California to this day. You can see the beast in motion in this brief clip:

Like any sci-fi vehicle, the Landmaster has fans, fan-pages, fan-diagrams, model kits, and lots of speculation as to its capabilities and capacities. The most common bullet-points seem to be amphibious capability, military communications/navigation gear, the obvious mounted weaponry (machine guns on the sides, turreted missile- and/or rocket-launcher on the roof), capacious rear cargo area (sometimes used to store a couple of light-duty off-road motorcycles), and a well-armored body. If you only know one "Damnation Van," this is the one to know. 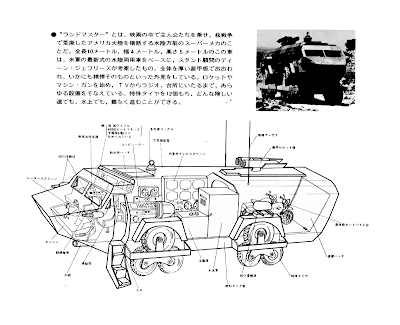 
When I was a kid, my cousin J.J. had a Super Van toy (a Matchbox / Hot-Wheels sort of thing) I recall envying (he also had a green Hot Wheels "Dream Van," ditto, and so many LEGOs that I just wanted to be him, but was not). 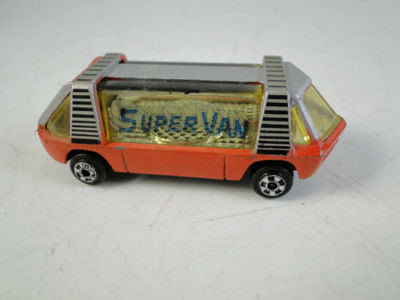 I had a thing for any matchbox car with interesting plastic windows, which is an odd thing to fixate on, but I was a weird kid. The Super Van had very interesting windows indeed, but in my innocence I had no idea it had a movie, in which the super van is solar-powered and has lasers. You can watch the whole thing on YouTube. I haven't, personally, watched the whole thing, because while I'm still a weird kid, I've learned that I have limits. I can absolutely recommend watching this video showing the interior, however, and keeping in mind, for entire run of the video, that the Super Van was originally built as "The Love Machine."

What's more, the Super Van is the creation of another legendary fantasy-carmaker, George Barris, perhaps most famous for the 1960s Batmobile, a job he took over when Dean Jeffries (above!) had to bail on the project. Small world? Probably so, in the specialized craft of fictional car-building. While the Super Van was absolutely in my mind in the dawning days of Encounter Critical, it feels to me less like a general template for a Damnation Van and more like "Thrazar's Own Custom Damnation Van," especially given the interior. Click here (or over here) to see Barris himself alongside his creation, and you can see he's decked out in a manner most appropriate for Thrazarian adventure.

If the Landmaster is the "military version" of the DV, this is the "leisure version," but still has lasers, of course, because they're the most disco possible weapon.


If the Landmaster is the military build, and the Super Van is the leisure build, the Ark II is the science build, complete with force fields, built-in laboratory gear, and standard equipment including a Jet Pack (sold separately, per the EC price-list) and a little car in the back called the Ark Roamer (a groovy little Brubaker Box, which works out, since Curtis Brubaker and the Brubaker Group built the Ark II and other vehicles used in the television series of the same name).

Ark II (the whole T.V. show, not just the Science Damnation Van) is another juicy piece of the Encounter Critical fruit salad, and you can watch all of it on YouTube, too. I can happily recommend it. It sits at that perfect intersection (for EC purposes) of "omg bad" and "hey actually kind of good." It's just about the most good-natured post-apocalypse drama ever made for children's TV, with a crew of young scientists (led by "Captain" Jonah, who I prefer to think of as "Wasteland Jesus"), and a chimpanzee named Adam, because things are better with a chimpanzee (yes, there's a chimpanzee in Intruder Moon, and his name is Pithicus and he wears a little lab coat and a diaper and he's awesome). Highlights of that first episode include master character-actors Malachi Throne and Jonathan Harris in epic scene-chewing competitions, so don't pass it up. 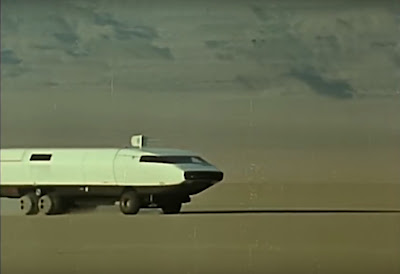 I believe that Ark II is one of those things Hank and Jim bonded over. A kid's show they watched shamelessly even though they were "too old for it," because it fit a lot of their ideals, ticked a lot of their boxes, and showed them something they wanted to believe in. Including a really pretty, and much more civilized, Damnation Van.

(I personally never had Ark II as a kid, but it got retro-introduced to my fake childhood thanks to folks on the EC Mailing List)


Vans were simply a big deal in the 70s, and so was sci-fi, so there were a number of sci-fi van toys. The most legendary of these is the only Damnation Van any of the Saturday Night Dragon Slayers ever owned: the Big Trak, an awesome programmable electronic toy. In the version of the story that lives in my head, the group ganged together and bought one for Hank for Christmas of 1979, and Hank adored it, and brought it to EC sessions ever-after.

Even cousin J.J. didn't have a Big Trak, and neither did I, but I remember staring at it in stores as a kid, and lusting after it in the Sears wishbook. Here's Starlog magazine (top) and the wishbook (bottom, in color) burbling about the toy that lets you stun "moon monsters" with tech "spun off from the space program." Rad. 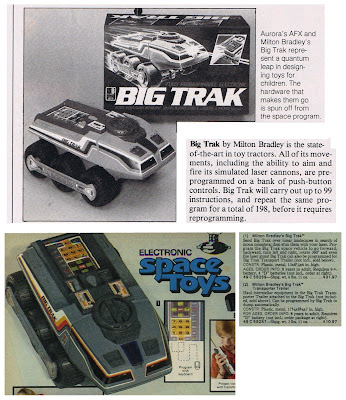 
I've saved the truest and most scientifically real for last. When I personally picture a Damnation Van, there are elements of Big Traks and Landmasters and Arks, plus cool windows and rotating disco fuckbeds ala the Super Van ... but the basic vehicle is always a mundane, real-world workhorse: the 1970s GMC Motorhome. GMC built nearly 13,000 engineered-from-the-inside-out custom motorhomes in the 70s, and they were frickin' magnificent.

Too mundane for EC? Just look, though: 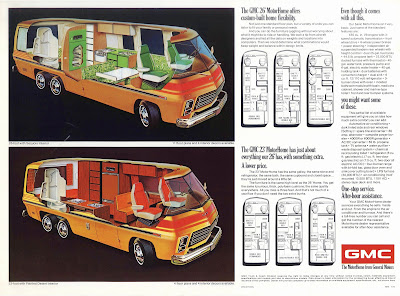 I mean yeah, it needs some military equipment, and some armor, some external weapons, maybe a force-field generator and an Edible Excretions Processing Minivat (for flavor, for variety) but it's almost there. I mean it's just ... yeah.

I like to imagine that Ivan Reitman was a secret Encounter Critical enthusiast back in the day, and that his comedy Stripes is basically Bill Murray and Harold Ramis acting out a version of their EC campaign (the movie's fictional APC, the EM-50 Urban Assault Vehicle, is - of course - a 1976 GMC Motorhome with a few props added, and while it's from 1981 and thus squeaks past the game's own era, it's a pretty great model for a Damnation-Van based comedy, to the extent the world needs such a thing)! 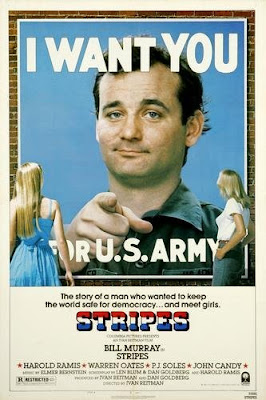 Here's hoping this finds you enjoying the far reaches of Vanth in "well equipped" comfort and luxury. Got any tales to tell? Want to be a blindtester for Intruder Moon? My inbox is always open.