Sandra and I went to see the new Hayley Atwell movie tonight, and it was very likeable despite needing more Hayley Atwell (and Kanga; Kanga got maybe two lines).

The story goes note-for-note exactly how you'd expect from the trailer and/or the first 15 minutes of the film, which is fine ... it's not the sort of story that needs a lot of surprises, really. The performances (both traditional and digital) are very good, and the melancholy moments are effective. The line "Did you let me go?" buried me deeply.

And now both Sandra and I are missing Agent Carter more than usual, and the usual is a lot.

It's also got me thinking about color again. Not that I often stop.

The palette of Christopher Robin is both warm and muted, which suits the film very well, but it also stands out, because in modern film, the fantastic (in the literal sense) usually likes to scream at you, visually, by being hyper-saturated, so you can't possibly fail to notice how fantastic it is because it's punching your eyeballs with impossible palettes. In modern CGI fantasy, it's apparently a sin for foliage to be green, for example: "fantasy" foliage is Tang orange and candy-grape purple and pulsing neon magenta.

Which isn't what I personally fantasize about. Different strokes and all, but the earthy-fantasy vibe of Christopher Robin made me very happy indeed. So did the balloon, which (against the film's grounded palette) could stand out, looking brilliant in ordinary, lovely red.

Which just goes to show I can turn anything into an opportunity to gripe. 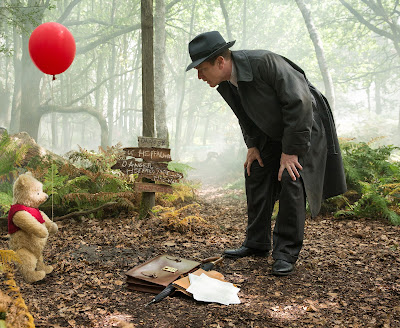