A Boy and His City Map

One of the other things I'm into, when I'm not writing RPG material or cooking with less sodium or making fonts, is fantasy maps. I mean both "fantasy" and "maps" in their broadest sense: I'm just as excited by a good starship deckplan, for example, as I am a treasure map of Crossbones Island or a floorplan of a modern office building that's secretly the criminal headquarters of the Perilous Prime (they're a supervillain team with an ever-changing roster, but it's always a prime number).

Usually, though, I'm stretching the definitions of neither word, making fantasy style maps both fantasy and mappish.

I'm always working on multiple fantasy maps, and I love both writing about and chatting about the process.

But lately, there's been one very special map that has my eye, and much of my spare-time attention (I'm trying not to give it my work-time attention, but sometimes it sneaks in there, too).

It's stupid big (40×40 inches, larger than most poster prints). But that's only the beginning of how stupid this map gets. Chronologically, it begins here:


That's not the map. That's another map of mine, depicting the prosperous mountain-lake town of Trostig. I'm a huge believer in pretty maps making some of the best player handouts in RPGs, and I'm a believer in handwritten letters making some of the other best handouts, so, with a straightforward desire for my fantasy module to have the Best Handout, I made a handwritten letter with a map on the back.

Making that map lit a fire 'neath my bottom, the way satisfying projects often do. To satisfy that burn, I made another town-map in that same approximate style, for Scott's Landing, further down the mountain and closer to the sea. But it didn't quench the burn. Deep down, I knew only one thing could.

I had taken great care with designing this style. I know the limits of this particular world's towns, so the scale was designed so that virtually any town could fit a map like this. The symbol-set, too, was designed around those needs, showing basic building outlines, roads, trees, water ... the kind of things a town-level zoom requires. I've got similarly-scaled maps prepared for Toast of the Town's sequels, naturally, so I wanted the style to make sense. For towns.

Not for big cities. Not for Shadow River, for which I already have a perfectly good map in the world's city style, showing things at the "neighborhood and district" scale: no individual trees or individual frickin' woodsheds.

Because that would be stupid. Which brings us back to this stupid, stupid map that owns my cartographic heart right now. 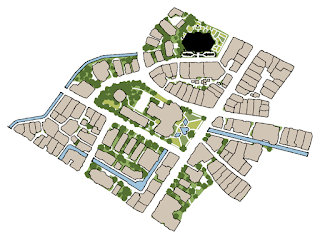 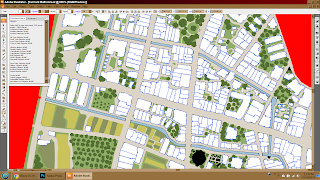 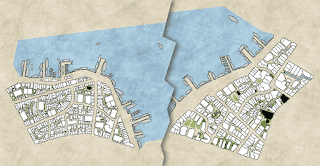 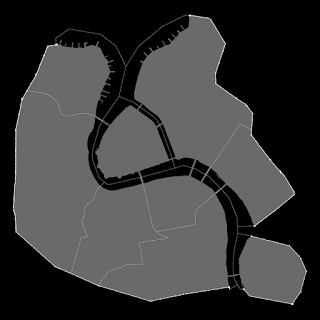 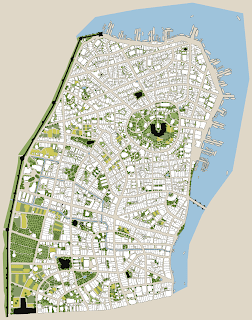 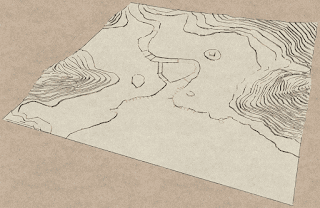 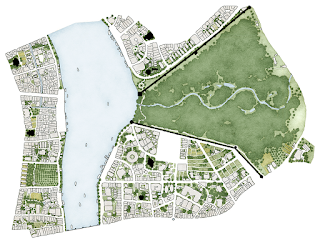 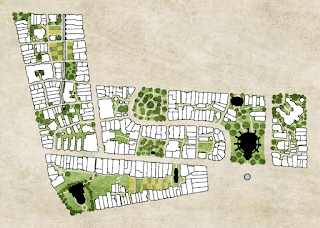 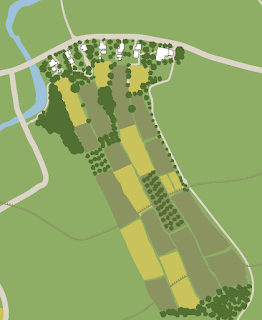 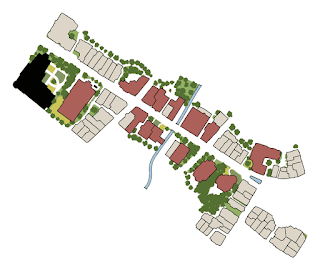 Trostig is a town. Scott's Landing is a town. Shadow River is a full-blown, too-big-for-its-britches city, somewhere in the zone between early-medieval London and late-medieval Paris, with a lot of very Uresia touches. It would take eight or more Trostigs, soaking wet from the lake, to weigh in against one Shadow River.

The images here are snapshots and mockups from the map in progress, the map where I'm doing a big city (and a couple square miles of the surrounding countryside) in the style I so carefully designed not to do this.

But that's the thing about butt-fires. Remember that brain I was talking about in the previous post? Same one.

But I wanted it anyway. I understood why they were asking.

The point of all this is basically a preface, or a warning: I'll be posting about fantasy maps, and sometimes that'll mean starship deckplans or treasure maps or modern floorplans or any number of regular-fantasy-regular-map type maps. But, until this beast is done, it'll usually relate in some way to the techniques I'm using, evolving, and in a few cases inventing for this monstrously stupid thing.